Don't take transparency for granted; FOIAs are always under fire

The 91st General Assembly of the state of Arkansas is winding down; the deadline to file new bills passed two days ago.  Unexceptionally among the states, this flurry of furious lawmaking always entails a range of assaults on the state freedom of information act (FOIA).  In fact, this spring season after the bill deadline is especially hazardous for transparency advocates, because pending bills and so-called "shell" bills, filed but devoid of content, can be quickly amended and rushed through committee with monstrous consequences.  The Arkansas Project, which favors transparency in state government, has written about the FOIA activity in this session, lately here and here. 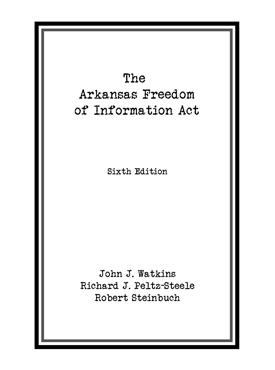 It happens that this year also has seen the publication of the sixth edition of the treatise, The Arkansas Freedom of Information Act (U. Ark. Press), on which I am privileged to be co-author with Professor Robert Steinbuch and lead author John Watkins, professor emeritus.  Steinbuch has been especially vocal in the media on FOIA, making the case for transparency and holding legislative feet to the fire of public accountability, lest legislators undermine the law.  He penned in jest a cartoon, which he's given me permission to publish here: 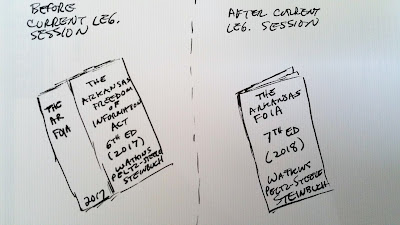 Last year the federal FOIA turned 50, and the Swedish Press Freedom Act, oft regarded as the first FOIA in the world, turned 250.  This year, alongside its contemporaries in many states, the Arkansas FOIA turns 50.  Amid all the changes of our technological and populist age--no matter whoever is wiretapping whom--let's hope that Steinbuch's cartoon is only a lampoon at legislators' expense, and not a portent for government transparency and accountability at any level.

Posted by Richard Peltz-Steele at 7:02 PM No comments: