The U.S. Supreme Court ruled this morning in favor of the church in the religious freedom case about public subsidy of playground surfacing materials.  The Court held that Trinity Lutheran (Mo.) could not be excluded from the program to provide recycled tire rubber only because it is a church.

There is some strong religious freedom language in the majority opinion.  From The Washington Post: <<Chief Justice John G. Roberts Jr., who authored the opinion, wrote, “The exclusion of Trinity Lutheran from a public benefit for which it is otherwise qualified, solely because it is a church, is odious to our Constitution … and cannot stand.”>>

The vote was 7-2 with Justices Ginsburg and Sotomayor in dissent.

The majority found the case rather easy, because Trinity Lutheran was excluded from a public program only because of its status as a church.  A discrimination on that basis alone can be supported only under the most exacting scrutiny, which Missouri could manage.  The Court left open the possibility that government discrimination against a church might be permissible, upon a much lesser burden, if a public benefit were to be converted to a religious use.

I point this out--and mention the case at all, as much more able commentators will opine in droves in the hours and days to come--only to highlight an intriguing (and telling?) paragraph in a separate opinion by new Justice Gorsuch, concurring, joined by Justice Thomas (citations omitted):

[T]he Court leaves open the possibility a useful distinction might be drawn between laws that discriminate on the basis of religious status and religious use. Respectfully, I harbor doubts about the stability of such a line. Does a religious man say grace before dinner? Or does a man begin his meal in a religious manner? Is it a religious group that built the playground? Or did a group build the playground so it might be used to advance a religious mission? The distinction blurs in much the same way the line between acts and omissions can blur when stared at too long, leaving us to ask (for example) whether the man who drowns by awaiting the incoming tide does so by act (coming upon the sea) or omission (allowing the sea to come upon him)....

I don’t see why it should matter whether we describe that benefit, say, as closed to Lutherans (status) or closed to people who do Lutheran things (use). It is free exercise either way.


In contrast, in another concurring opinion, Justice Breyer would have sharply limited the case to its facts.

The full decision and opinions in Trinity Lutheran Church of Columbia, Inc., v. Comer (no, not Comey, but a Missouri official, Comer) are available online.

Posted by Richard Peltz-Steele at 8:24 AM No comments:

In 1963, the murder of Harding College (now University) alumna and English Professor Ruby Lowery Stapleton shocked the community of Searcy, Arkansas.  According to the Harding College Bulletin, Stapleton was believed taken from a self-service laundry in Searcy, Arkansas.  Federal and state law enforcement officers and Harding volunteers searched for her for 11 days, and Harding offered a $1,000 reward for information leading to her detection.  Her body was found by a squirrel hunter in a dry creek bed 15 miles from the laundry.  Stapleton was survived by her husband and two children. 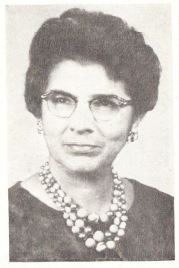 Stapleton’s murder remains unsolved.  Fifty years later, in November 2013, family members sought access to the Arkansas State Police case file on the Stapleton murder.  The request spurred brief police re-engagement with the cold case, apparently to no avail.  Police refused access to the file under the ongoing investigation exemption of the Arkansas Freedom of Information Act.  After in camera review of the file, the Arkansas Circuit Court rejected the police theory and ordered the file disclosed.  The Arkansas Supreme Court affirmed.

Ongoing investigation exemptions are a FOIA universal across the state and federal sunshine statutes.  The public policy supporting them is hardly disputed: police investigations require secrecy, lest evidence be compromised or suspects tipped off.  At the same time, transparency is nowhere more urgent a policy priority than when counterpoised with the enormity of state police power to curtail liberty and even life.  This balance proves exceptionally difficult to achieve.  Cases vary broadly in their particulars, and judicial determinations are profoundly fact driven.

Therefore, though the language of ongoing investigation exemptions varies considerably, the question usually boils down to a court’s willingness to defer to, or to second-guess, police discretion.  The Arkansas statute provides a good example of the textual variability, because the statute actually protects only “undisclosed” police records against disclosure.  But that nonsensical oddity has long been construed by the state courts to mean “ongoing investigation,” in conformance with multistate FOIA norms.

In practice, on the whole across the states, courts tend to err on the side of secrecy.  To the frustration of journalists especially, no local judge wants to be responsible for obstructing or derailing a criminal investigation.  Thus law enforcement officials are frequently able to prolong the secrecy surrounding an investigation file well beyond arrest—to charge, to trial, even to exhaustion of appeals.  In fact, criminal investigation files might remain sealed indefinitely, while co-conspirators remain at large—or crimes remain unsolved.

Despite judicial patience that sometimes seems inexhaustible, the imperative of accountability for law enforcement weighs heavily against indefinite secrecy.  The Arkansas Supreme Court quoted a treatise on the Arkansas FOIA co-authored by John J. Watkins, Robert E. Steinbuch, and myself:


Police and prosecutors should not be permitted to apply this exemption as a matter of course until conviction or acquittal, or indefinitely until a charge is brought, if there is no genuine interest in enduring secrecy. To do so would excessively insulate the government against legitimate probes by the public and media into the performance of law-enforcement functions, even apart from the disadvantage to criminal defendants.

Long-cold cases such as the Stapleton murder squarely present this problem.  In reviewing the investigation file in camera in 2014, the Arkansas Circuit Court found “sparse activity” since 1965.  Police cited no documentary evidence of ongoing investigation from 1965 until the filing of the family’s FOIA request.  The Arkansas Supreme Court summed up the case simply: “This is a 54-year-old murder case. No charges have been brought or appear to be imminent.  The victim’s family and the public are entitled to know how the officials in this case, i.e., law enforcement, performed their duties.”

In the course of its concise analysis, the Court reiterated several points of best practices in FOIA compliance and dispute resolution.  These are multistate principles that warrant review.

The Arkansas Supreme Court stated moreover another solid practice point that had been lacking in state precedent:  Also as usual in litigation, questions of fact in a FOIA analysis are subject to the more deferential appellate standard of review, clear error.  As the Court observed, application of an ongoing investigation exemption is especially prone to generate a question of fact, as a qualitative, if not quantitative, assessment of purported police investigative activity is part and parcel of the analysis.  In the Stapleton FOIA case, the Court applied the clear error standard to defer to the circuit court’s assessment of the 1965-2014 police file.

As the Arkansas Court wrote, “A finding is clearly erroneous when the appellate court is left with a definite and firm conviction that a mistake has been committed.”  Or as the Seventh Circuit famously wrote in 1988: “To be clearly erroneous, a decision must strike us as more than just maybe or probably wrong; it must, as one member of this court recently stated during oral argument, strike us as wrong with the force of a five-week-old, unrefrigerated dead fish.”  A finding that is not clearly erroneous should be left undisturbed.

Finally, full disclosure and point of privilege:  Justice Wood, who authored this case for the Arkansas Supreme Court, was a law student, and then later a dean, when I taught at the University of Arkansas at Little Rock Law School.  She has shined in her career as lawyer, academic, and judge, undoubtedly owing to her unyielding integrity, character, and intellect—and decidedly owing in no part to me.  Nevertheless, I assert pride by virtue of mere association.
Posted by Richard Peltz-Steele at 2:57 PM 2 comments: