I pledge not to accept NRA donations: Gun control and denial of opportunity to wound and kill 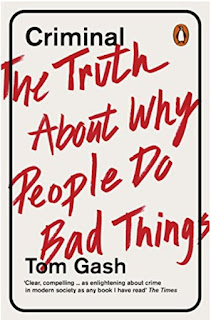 Let the record reflect that I’m an occasional NRA member and supporter of the Second Amendment—not for hunting, and not just for personal security, but mostly for the real need to be able to overthrow the government if—when—it comes to that.
But the NRA should be at the table talking about gun control.  The simple reality of preventing violent crime is that denying opportunity to would-be offenders is the only thing that works well.

That was my over-simplistic take-away from Tom Gash’s The Truth About Why People Do Bad Things (2016) (Amazon), which I just read coincidentally with Parkland.  It’s a fabulous book even if you do not have much interest in criminal law and policy, which I do not.  It’s an important book for anyone just to be an informed voter.  Tom Gash is a senior fellow at the Institute for Government in the U.K.  Hat tip to my uncle in London for putting me on to it.

Gash dispels 11 myths about crime prevention.  Those chapters are well worth reading, so we don’t find ourselves recycling foolish misconceptions as we make crime policy.  Indeed, to read Gash’s account, the cycle of crime prevention policy over decades seems like an exercise in Groundhog Day.  In the big picture, there are two predominant ways of thinking about crime, and they’re both wrong.  One view says criminals are innately bad actors, so we need to create powerful disincentives, such as three-strikes laws, to make them do the right thing.  The other view says that crime is a socio-economic problem we can fix with education and jobs.  Wrong and wrong.  Not wholly wrong, but too wrong for either redressive strategy to be effective.

Needless to say, crime is more complicated than one worldview, and there is no one panacea.  However, there is one thing that works a lot of the time: denial of opportunity.  A lot of crime happens in the moment and is not wholly irrational.  A modest deterrent gives a person’s better angels a chance to be heard.  Something as simple as a bike lock makes a potential thief not become one.

So we come to guns.  As the Parkland teens and parents have said, access to “weapons of war” is just too easy.  A regulation as modest as a waiting period can mean denial of opportunity for someone who is emotionally imbalanced, whether in the moment or by pathology.

I support the Second Amendment, and I’m wary of bans on weapons we would need to overthrow a tyrannical government.  I support the First and Fourth Amendments too, but I understand parade permitting and search incident to arrest.  I would like to see the NRA, which I respect as a key protector of civil liberties, as a responsible participant in the discussion about reasonable regulation, rather than an increasingly alienated fall guy.
Posted by Richard Peltz-Steele at 9:11 AM