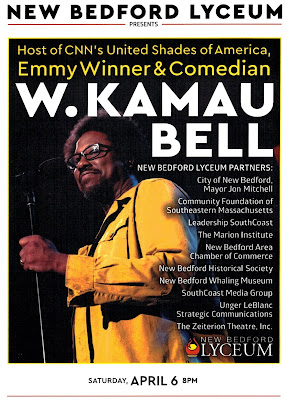 My wife and I were privileged last night to see W. Kamau Bell speak at the Zeiterion Theatre in New Bedford, the show part of the New Bedford Lyceum.  (Also in the audience: our friends, colleague Professor Justine Dunlap and UMass Law alumni City Councilman Hugh Dunn and attorney and radio host Marcus Ferro.)  Bell is a comedian, but at the same time, most definitely a social activist, performing through multiple media, including television, podcasts, and books.  He is most familiar to me from his Emmy-winning show on CNN, United Shades of America, which returns to the small screen with its season 4 premiere, about megachurches, on April 28 (cordcutters pay per episode).

Tongue in cheek, Bell titled his show at the Zeiterion, "The W. Kamau Bell Curve: Ending Racism in About an Hour," a play on the title of the controversial 1994 book, The Bell Curve, by Richard J. Herrnstein and Charles Murray.  Bell's essential thesis is that race is a construct, but, nevertheless, one we have to pay attention to.  Bell aims "to dismantle racism," but not race, which he believes can be turned into a constructive concept for the good of society as a whole.  Any effort on my part to summarize Bell's approach beyond that point would be inevitably inadequate.  Suffice to say, he works toward his mission with a brilliant combination of observational hilarity, multimedia presentation, and sharing
about his own life and family.  He does not ask that everyone agree with him on every point, he admonishes.  Rather, he has accomplished enough if people are moved to engage in meaningful dialog about race and social justice, which surely they must be.

The Zeiterion Theatre, or "the Z," is a classic building in old, cobblestoned New Bedford, Massachusetts, opened in 1923 to host vaudeville acts.  Its fortunes have waxed and waned with the history of working-class New Bedford.  The New Bedford Lyceum is a community cultural organization that dates to the city's whaling heyday.  Founded in 1828, Lyceum lectures and events aimed for “the improvement of its members in useful knowledge and the advancement of popular education.”  The Lyceum was disbanded in 1905, but revitalized by New Bedford leaders in 2016.

Bell was a smart choice to fulfill the Lyceum's public-educational mission.  New Bedford has an unusually (for not-Boston, Massachusetts) diverse population in terms of race and economic class, leading inevitably in our trying times to social tension and painfully obvious stratification.  City leaders—such as Councilman Dunn and UMass Law alumna Mali Lim, city coordinator for community education—work mightily to keep the peace, and, moreover, turn tension and diversity into productive community identity.  Bell's lecture at the Z was preceded by four public screenings and discussions in New Bedford and the surrounding area, one at UMass Dartmouth, each reflecting on a theme from Bell's CNN work.
Posted by Richard Peltz-Steele at 9:04 AM