The World Cup of Human Rights? 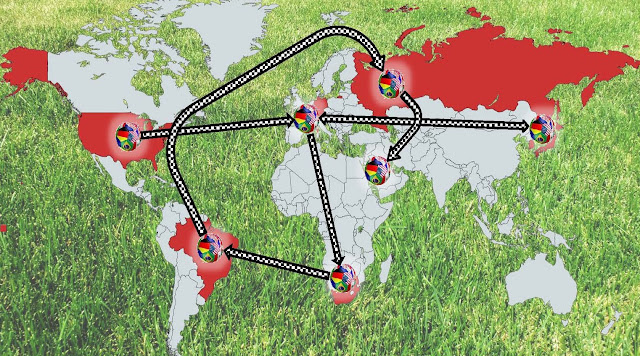 I prepared this map for the Inter-Disciplinary.Net conference, Sport: Sport Places, Money, and Politics, the 5th global meeting of the Sport Project: Probing the Boundaries, this week at Mansfield College, Oxford. The map shows the movement of the FIFA Men's World Cup since the United States in 1994, illustrating FIFA's deliberate campaign to globalize the tournament and the sport.

In my talk yesterday, I traced the marriage of FIFA and human rights from Football for Hope investments in World Cup 2010 South Africa, to World Cup 2014 Brazil; on to World Cup 2018 Russia and World Cup 2022 Qatar; and at last, to a World Cup 2026 that might embrace the U.N. Guiding Principles on Business and Human Rights in the manner proposed by Professor Ruggie.

Daunting challenges are presented with respect to international legal norms on housing, labor, sexual identity, racism and equality, due process and criminal punishment, and religious and expressive freedom. FIFA's extreme demands on host countries for infrastructure development, commercial protectionism, and security have made tournament hosting more easily the province of authoritarian regimes than of Western-style democracies, and that tendency works at cross-purposes with the incorporation of human rights norms in the Western legal tradition.
Posted by Richard Peltz-Steele at 2:17 AM