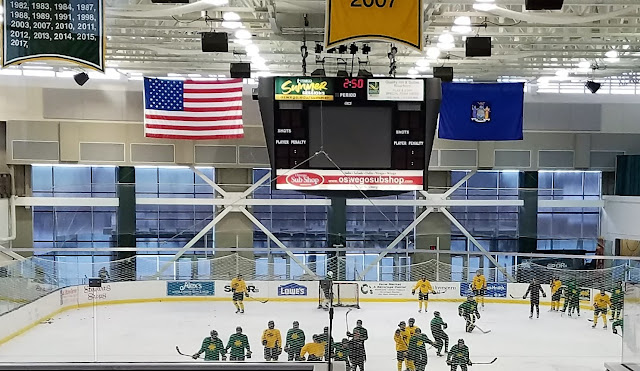 I had a profound privilege the week before last to visit and speak at SUNY Oswego.  I am indebted to the Political Science Department and the Pi Sigma Alpha (PSA) chapter there, especially Dr. Helen Knowles and PSA chapter officers Nicholas Stubba and Kristen Igo.  Oswego is a charming town, and the warmth of the people at SUNY more than made up for the lake effect snow. 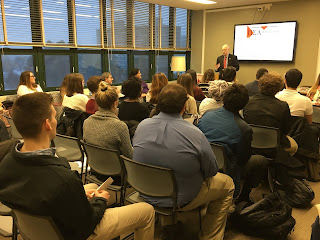 Pi Sigma Alpha, the political science honor society, inducted a new class of members from among juniors and seniors, based on their coursework and academic achievement.  The students' faculty in the Political Science Department and friends and family joined the ceremony.  I made remarks on the subject of PSA's 1920 founding and similarities and differences in our contemporary political landscape as we approach the organization's 100th anniversary. 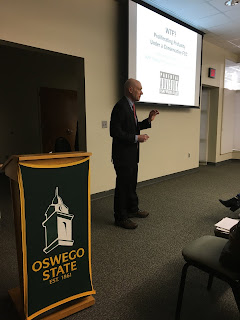 The evening after the induction, SUNY Oswego kindly hosted me to present my research on "dirty language" and censorship.  In the talk, titled "WTF? Proliferating Profanity Under a Conservative FCC," I examined indecency doctrine in FCC television and radio regulation, especially in the three most recent presidential administrations.  The talk was held in a beautiful conference room of the Marano Campus Center, with windows overlooking the campus ice hockey rink (above).  Faculty and students from various departments attended, including a journalism student reporter for the campus newspaper, The Oswegonian. 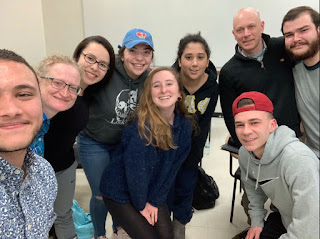 In the course of the visit, I had ample time to meet, and be impressed by, dedicated SUNY Oswego students, who don't let a little lake-effect snow keep them from class.  Here I am with Dr. Knowles and her civil liberties class.  They are lucky to have a seminar led by Dr. Knowles, an expert on various topics in civil rights, especially the jurisprudence of Justice Kennedy and the Lochner-era history of economic due process. She is the author of The Tie Goes to Freedom: Justice Anthony M. Kennedy on Liberty (2009, updated 2018) and co-editor (with Steven B. Lichtman) of Judging Free Speech: First Amendment Jurisprudence of Supreme Court Justices. She is at work currently on four more books, all under contract: Making Minimum Wage: Elsie Parrish v. The West Coast Hotel Company (U. Okla. Press), Lights, Camera, Execution! Cinematic Portrayals of Capital Punishment (co-authored with Bruce E. Altschuler and Jaclyn Schildkraut, Lexington Books), Free Speech Theory: Understanding the Controversies (co-edited with Brandon T. Metroka, Peter Lang), and The Cascadian Hotel (co-authored with Darlene L. Spargo, Arcadia Publishing).

Particular thanks to Mr. Stubba, who indulged my desire to brave the bitter wind and see Lake Ontario from the shoreline.  Watch how the ice undulates on the waves!