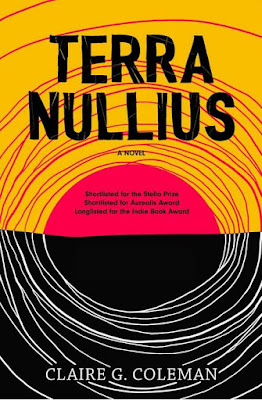 I'm not easily moved by fiction, so I don't make recommendations lightly.  And you need to read this book.

Terra Nullius by Claire G. Coleman (Amazon) has been a hit in Australia and thankfully was picked up for U.S. circulation by a small, Massachusetts-based publishing house, Small Beer Press.  The book has been shortlisted or nominated for a bunch of prestigious awards and won the Norma K. Hemming for exploration of themes of race in speculative fiction.  The book is a product of the Queensland "black&write!" indigenous writing fellowship.  Coleman identifies with the Noongar people of the southwestern coastal region of Australia.  A poet and writer, this is her debut novel, and she wrote it while exploring indigenous lands in a caravan.

The "speculative fiction" element of Terra Nullius is not immediately obvious in the telling of the story.  I won't spoil it here, and I urge you to avoid spoilers so that you can experience it yourself.  Even so, being married to a librarian, who recommended this book to me, I knew something of the novel's secret.  I was gripped early nonetheless, and the reveal was still richly enchanting.  For a while I had to ponder, why did Coleman tell the story this way?  But I got it, and the author interview in my Small Beer Press edition confirmed: Coleman's narrative delivers empathy for the indigenous experience in a way that I have never before witnessed.

There are countless parallels between Coleman's take on indigenous life and British colonization and the experiences of other marginalized groups, including Africans amid European colonization and First Nations in the United States.  The title, "terra nullius," refers to the Latin term and legal doctrine meaning "nobody's land."  Specifically the term was employed by the British to legally rationalize claim to Australia, as if the continent had been uninhabited.  The term turns up in American law, too, to justify claims to this continent and the displacement of native peoples.  Coleman states that she has not yet been to the United States, but would welcome the chance to compare notes on our reservations.  I would love to witness that conversation.  In ironic coincidence, I read Terra Nullius while exploring the reputed landing sites of Christopher Columbus on the Samaná Peninsula of la República Dominicana.  There are scarcely few more apt places on earth to consume this book.

While the focus might be on the indigenous perspective, this novel, in its sum, speaks even more ambitiously to the whole of our human experience.  It demands that we interrogate who we are as a species; that we ask whether confrontation and violence—might makes right—are intrinsic to our human identity, or a choice that we make, something we can change.  It comes clear that our survival may well depend on the answer.
Posted by Richard Peltz-Steele at 6:00 AM