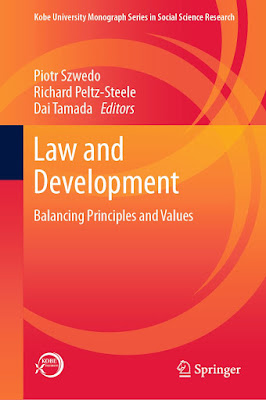 My colleague Gaspar Kot and I have published a book chapter entitled Private-Sector Transparency as Development Imperative: An African Inspiration.  The chapter appears in the new book, Law and Development: Balancing Principles and Values, from Springer, edited by Professors Piotr Szwedo, Dai Tamada, and me (more in the next entry on this blog).  Here is our abstract:


Access to information (ATI) is essential to ethical and efficacious social and economic development. Transparency ensures that human rights are protected and not overwhelmed by profiteering or commercial priorities. Accordingly, ATI has become recognised as a human right that facilitates the realisation of other human rights. But ATI as conceived in Western law has meant only access to the state. In contemporary development, private actors are crucial players, as they work for, with, and outside the state to realise development projects. This investment of public interest in the private sector represents a seismic shift in social, economic, and political power from people to institutions, akin to the twentieth-century creation of the social-democratic state.

Contingent on state accountability, Western ATI law has struggled to follow the public interest into the private sector. Western states are stretching ATI law to reach the private sector upon classical rationales for access to the state. In Poland, hotly contested policy initiatives over privatisation and public reinvestment have occasioned this stretching of ATI law in the courts. Meanwhile, in Africa, a new model for ATI has emerged. Since the reconstruction of the South African state after Apartheid, South African ATI law has discarded the public-private divide as prohibitive of access. Rather than focusing on the nature of a private ATI respondent’s activity as determinative of access, South African law looks to the demonstrated necessity of access to protect human rights.

This chapter examines cases from South Africa that have applied this new ATI model to the private sector in areas with development implications. For comparison, the article then examines the gradually expanding but still more limited Western approach to ATI in the private sector as evidenced in Polish ATI law. This research demonstrates that amid shifting power in key development areas such as energy and communication, Polish courts have been pressing ATI to work more vigorously in the private sector upon theories of attenuated state accountability, namely public ownership, funding, and function. We posit that Poland, and other states in turn, should jettison these artifices of state accountability and look instead to the South African model, since replicated elsewhere in Africa, for direct access to the private sector. ATI law should transcend the public-private divide, and the nations of the North and West should recognise human rights as the definitive rationale for ATI in furtherance of responsible development.

With Mr. Kot's help, this chapter extends to a European context my previously published comparative work on private-sector information access. Gaspar's expertise was invaluable for Polish legal research, to be sure, but moreover to help me to understand Poland's richly complex, on-again-off-again courtship of privatization.

In earlier works, I compared the South African approach with the United States FOIA and with Indian RTI law.  I am excited about this approach in access-to-information law, which is now gaining traction elsewhere in Africa, because I believe it to be a potential game-changer in saving democracy and human dignity from corporatocracy. I am spending some of my sabbatical time this semester in Africa and other parts of the developing world studying how this approach is especially salient in the context of problems in social and economic development.
Posted by Richard Peltz-Steele at 6:00 AM