Throughout Guinea-Bissau, in West Africa, characteristic landmarks found in town centers, parks, and traffic circles are large, dilapidated blocks of painted concrete, often graffitied. These blocks are actually bases that have held statues of prominent leaders during the country's tumultuous history since independence was declared in 1973.

For Guinea-Bissau, it's been a journey as rocky and potholed as the nation's roads. Independence from Portugal was hard fought, with the Soviet Union, Cuba, and China pouring in arms for the revolutionaries to the end of establishing a communist foothold in West Africa. Anti-revolutionary soldiers were mass murdered after their defeat. Subsequent instability and corruption led to civil war in the 1990s, and election turmoil and political violence marked the 20-aughts. The presidential election in 2019 was contested, and just this week, since inauguration of the ultimately recognized victor, there are reports of military intimidation of the courts. No wonder statues don't last long in poor Guinea-Bissau. 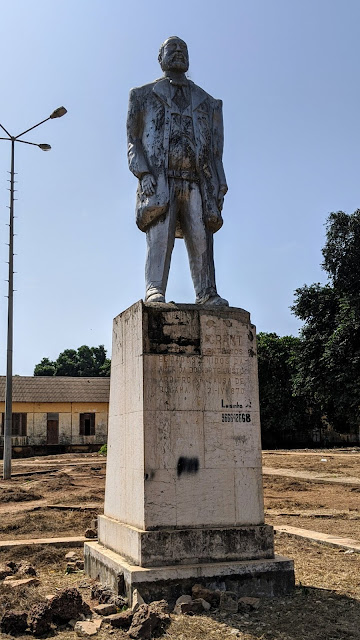 That makes one statue still standing all the more an oddity. In an overgrown park in the heart of the main town on Bolama Island, in the Bijagos Archipelago, at the center of low walls of crumbling concrete that once demarcated colorful stars, the likeness of 18th U.S. President Ulysses S. Grant rises defiantly.

The Grant statue is a curious throwback to Portuguese colonial rule. Actually, all of Bolama Town is a throwback to colonialism. Once grand Portuguese constructions crumble in slow decay in what's sometimes called Guinea-Bissau's "ghost capital." European powers such as Portugal favored locating their colonial bases of operations on offshore islands, where winds kept malarial mosquitoes at bay. Today the ghost capital is inhabited, despite its state; thousands of people live in subsistence, and sometimes dependent, conditions amid the ruins.

In the 1860s, President Grant became the mutually agreed upon arbitrator between Portugal and Great Britain over territory in the islands. After Grant awarded Bolama to Portugal in 1870, the Portuguese erected the statue to honor him. Notwithstanding the resolution of that dispute, and despite British efforts to aid the Confederacy and topple the Union in the Civil War, Grant was ultimately credited with strengthening U.S. relations with Britain during his two terms as President in the Reconstruction era. Grant proved so popular abroad that he and his wife embarked on a world tour after his presidency, and, with the imprimatur of President Rutherford B. Hayes, Grant inaugurated the custom of former presidents conducting informal diplomacy abroad.

The tale of Grant's Bolama ghost gained an unusual epilog in 2007, when the statue went missing. Ofeibea Quist-Arcton reported the story for NPR. Apparently stolen to sell as scrap metal, Grant was recovered in pieces, and authorities ultimately restored him--not how things usually work out for statues in Guinea-Bissau.