Catching up on reading since the close of the spring semester, I just finished Professor Marshall Shapo’s The Experimental Society (Transaction Publishers (now Routledge) 2016) (385 pp.) (publisher, Amazon, SSRN abstract, author interview) (385 pp.).  I highly recommend the book, which is fit for general audiences, besides lawyers and law students. 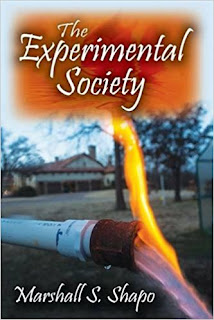 The experiment of the book’s title refers loosely to the American mix of free market and tort litigation, which works out the rules for what is allowed and not allowed in our society.  The dynamic is most plain in product liability.  A manufacturer brings to market a new and useful product, such as asbestos.  Later it’s learned that the product poses a grave risk to human health.  In extracting accountability for physical injury, the tort system regulates the continued use of asbestos.

What this system ill accounts for is its human toll.  The tort system is a balancing act.  Extreme regulation (vetting?) of everything new—a drug, a car, or a method of cleaning floors—would make research and development prohibitively expense and smother innovation.  Injury and death would result from drugs never developed, or safety innovations never deployed.  At the other extreme, diminished accountability would sanction the prioritization of profit over life.

Civil conflict resolution—our litigation system—threads, marks, and forever revises the boundary between right and wrong.  But our dependence on that system presupposes optimal, if not ideal, efficiency.  In reality, our tort system is rife with inefficiencies.

The starkest of those inefficiencies might be time.  I just takes too long to reach a conclusion in U.S. litigation—months, years, and sometimes decades.  While the wheels of justice grind, injured persons are not made whole, and new victims are claimed.  Another inefficiency is “transaction costs,” that is, the cost of dispute resolution, which is compounded by time.  Our drive for just and precise outcomes means that lawyers, experts, and litigation soak up a disproportionate amount of resources—if a matter can be litigated at all—re-victimizing the injured plaintiff and penalizing a defendant that might or might not have done anything wrong.

But inefficiencies get worse still, as the tort system tends to perpetuate socio-economic inequalities and irrational discriminations.  A poor community, less able to accomplish political organization or campaign contribution, cannot finance tort litigation to combat the impact of industrial pollution as effectively as a wealthy community can.  Even after wrongdoing is established in tort litigation, awards turns on loss, meaning that the working poor and the unemployed have less to recover than the injured doctor or lawyer.  These socio-economic effects exaggerate systemic prejudices of race and gender.  Moreover, bias can be perpetuated in fact-finding through judge and jury in a case.  And bias finds its way even into law itself, such as in liability standards that favor the alienation of real property—and therefore those who can afford it.

The Experimental Society examines the real social impact of our litigation system as hall monitor.  Shapo engages briefly with the familiar territory of product liability for asbestos and cigarettes.  But with that historical foothold, the book ranges widely to examine contemporary risks, such as bisphenol A (BPA) and vaping.  Shapo moreover expands his inquiry well beyond straightforward product liability.  He engages at length with environmental contamination, examining fracking, oil spills, and nuclear accidents.  He considers threats to the food supply, such as mad cow disease with its mysterious pathology.  Shapo also thinks expansively about experiment, embracing in his analysis both the deliberate experimentation of human clinical trials and the inadvertent yet ultimate experiment of climate change.

This encyclopedia of troubling experiments under way in our world delineates one axis of Shapo’s inquiry.  Meanwhile he draws a second axis, which traces the anatomy of risk and rules.  About the first half of the book explicates case studies to the end of broadly defining risk and experimentation.  The latter half of the book dives deep into dispute resolution, considering how this broad range of experimentation in our society has generated various standards, rules, and remediation systems in workplace safety, consumer protection, and mass tort litigation.  Shapo’s end-game, reached in the final chapters, considers the interplay of our experimental society with cultural and moral factors—for example, our values with respect to personal responsibility, risk-utility economics, and technological determinism.

As the back cover of The Experimental Society reminds us, Marshall Shapo—the Frederic P. Vose Professor at Northwestern University Law School, and, disclosure: my lead co-author on the casebook Tort and Injury Law, and a treasured mentor—has been writing about injury law for half a century.

Yet however much the product of an elder statesman in tort law, The Experimental Society is boldly contemporary.  The book is a one-stop shop for anyone who wants to tour the leading edge of risk, health, and law.  The relevant science and technology, business and economics, and law and policy all are laid out in plain language to engage any reader interested in the human condition.

The Experimental Society disappointed me in one respect only: it offers no answer.  The reader should be warned that the book ends with only the urgent question it raises, where the balance should be struck in our tolerance of risk.  This is not The Secret, with the promise to invigorate your fortunes; nor Hidden Figures with its revelatory moral tale; nor the latest blueprint to fix our democracy.  The Experimental Society isn’t selling answers.

Though I was disappointed not to find at the book’s end that Shapo’s wealth of experience could map out The Better Way, that expectation was foolhardy on my part.  However skilled a researcher and writer, Shapo is after all a teacher.  He recounts in the book a Socratic game he played with his eight-year-old granddaughter to demonstrate for her, of all things, Ken Feinberg’s predicament in compensating economic loss after the BP oil spill.  In good American fashion, the girl favored compensation precisely and fully for everyone who suffered injury.  Shapo didn’t tell her that that, ultimately, would be impossible; he showed her.

And that’s what The Experimental Society does: it shows us a problem that is inherent in the human social condition.  It turns the problem over, so we can see it from every angle.  Risk, it turns out, is not antagonistic to life; risk is an indispensable condition of life.  Risk yields reward, and reward makes life worth living.  How do we manage that risk to maximize reward, and what costs are we willing to tolerate in its pursuit?  Shapo knows that that’s an ancient problem—older than Deuteronomy 19:5.  So in The Experimental Society, he does the best a teacher can: to restate an eternal question for a new age.

Posted by Richard Peltz-Steele at 12:48 PM