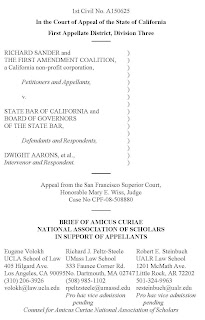 Representing the National Association of Scholars, UCLA Professor Eugene Volokh, UALR Professor Robert Steinbuch, and I filed an amicus brief in a California appellate case in which we argue the public interest in social science research, especially freedom of information in the area of legal education and admission to the bar, while managing risks to personal privacy.  Below is the introduction.  A longer excerpt appears here on TaxProf Blog, along with a link to the full brief in PDF.  My thanks to two formidable writing partners and a dedicated client.

The public good often depends on social science research that employs personal data. Volumes of scientific breakthroughs based on data accumulated through access to public information demonstrate the importance and feasibility of enabling research in the public interest while still respecting data privacy. For decades, reliable and routine technical methods have ensured protection for personal privacy by de-identifying personal data.

Posted by Richard Peltz-Steele at 8:43 AM No comments:


On Boston Public Radio yesterday, the usually staunchly civil rights-sensitive Jim Braude, a former union attorney, and media personality I admire greatly, said he's not so worried about due process where #MeToo condemnations are concerned.  Women have suffered oppressive exploitation for so long, historically, he reasoned, that if an accused suffers an inequity here or there today, it's a sacrifice he (or she) should be willing to make in the greater arc of justice.

I've been really upset about Braude's comment.  I haven't been able to let it go.   I've been off the blog a while, while fighting toward two Jan. 31 deadlines on different projects.  But I'm jumping on here to say my piece.

In fairness, I've taken Braude out of context.  He and co-host Margery Eagan were recalling an earlier discussion about the Aziz Ansari story.  Here's the initial essay at Babe.net that stirred the pot. It's concerning; I don't mean to take away from that.  But from Damon Linker at The New Republic, here's a good opinion in The Week that explains the longer view.  I'm sure Braude doesn't favor criminal prosecution, or even civil liability, without due process.  But there are painful and meaningful consequences that fall short of those penalties, and consequences may be warranted.  More than social and professional alienation is surely called for in countless cases, cited to Time by Linker.  From a legal standpoint, these cases sorely complicate the usual innocent-until-proven-guilty imperative because of our culture's tragic record of tolerating discrimination, exploitation, and silence, and now rapid evolution of norms.  Braude fairly raises the difficult question, if not formal due process, then what?

It especially raised my eyebrows to see Margaret Atwood on the "concerned" list in Linker's column.  Here's Atwood's piece in The Globe and Mail. Atwood told the story of a fired professor at the University of British Columbia.  Her recitation included this:

[A]fter an inquiry by a judge that went on for months, with multiple witnesses and interviews, the judge said there had been no sexual assault, according to a statement released by Mr. Galloway through his lawyer. The employee got fired anyway.


It happens that at this very moment, I have charges of gender discriminatory conduct pending against me--have had, since April 2017.  I've been admonished not to talk about it, and I will not say much.  What is salient, what #MeToo and Atwood's and Linker's columns compel me to report, is that I've been told that there is no evidence to support the allegations, but I have been recommended for punishment anyway.  That was months ago, and I still await my sentencing.

My question for Jim Braude and anyone who would forego due process for an accused: Will you step down from your career, give up your livelihood and support for your family, upon a false allegation, because that's just a sacrifice you're willing to make for the greater arc of justice?  If I lose my job and cannot keep my daughter in college, pursuing a career in which women have been and still are marginalized, is that a worthwhile sacrifice for the greater good for gender equality?  Am I being selfish?

Posted by Richard Peltz-Steele at 7:58 AM No comments: