The summer beach read you've been looking for:
Don Herzog on 'Defaming the Dead' 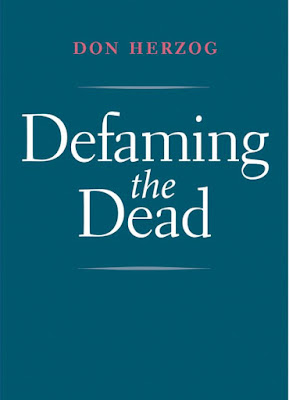 Looking for the perfect gift for that tort lover in your family?  The perfect read for the beach this summer?  Look no farther.  Pick up Don Herzog’s Defaming the Dead (Yale University Press 2017).

Herzog, a law professor at the University of Michigan, published this odd delight.  He makes a cogent argument against the common law rule prohibiting defamation actions predicated on injury to the reputation of the dead.  I was skeptical: a whole book about this little common law trivium?  Turns out, the history of defamation and the dead is compelling: at times bizarre, thought-provoking, and often funny, especially in Herzog’s capable conversational style.

Do you care what people say about you after you die?  It’s human nature to put a lot of thought into the future beyond your lifespan.  But it doesn’t really matter.  You won’t be here to be injured by defamation, nor gratified by its omission.  And if you’ve moved on to a heavenly (or other) afterlife, why would you care what mortals are saying back on earth?  Sometimes we imagine that we care about the future because we want happiness for our survivors.  But we won’t be here to know whether they have it, so is the interest really ours, or theirs?  Should the law protect either?  These problems, which Herzog posits in the beginning of the book, force some deep thought about what we want to accomplish with tort law—e.g., compensation, deterrence, anti-vigilantism—and accordingly, how we think about tort’s elements—duty, breach, causation, and injury—in the context of dignitary harms.

To oversimplify, Herzog pits what he calls “the oblivion thesis”—you can’t assert legal rights from beyond—against the Latin maxim and social norm, de mortuis nil nisi bonum, loosely meaning, “speak no ill of the dead.”  Common law defamation observes the first proposition, while as to the second, Herzog cautions: “No reason to think that just because it’s stated in Latin and has an imposing history, it makes any sense.”

Yet as Herzog then well demonstrates, we observe the Latin maxim in American (and British) common law in all kinds of ways.  The law’s purported disinterest in protecting reputations of the dead never became a rule in criminal libel.  And 19th century precedents that excluded post mortem defamation recovery seem to have been motivated by the same illogic that survival statutes were meant to redress.

Meanwhile we recognize a range of legal interests that appear to reject the oblivion thesis:  We honor the intentions of the dead in trusts and estates.  Attorney and medical privileges can survive death, even as against the interests of the living.  In intellectual property, copyright and publicity rights survive death, and trademark discourages disparagement of the dead.  Privacy in the federal Freedom of Information Act protects survivors by way of the decedent’s personal rights.  And Herzog devotes an entire riveting chapter to legal prohibitions on—and compensations for—corpse desecration.

Whether or not you’re convinced in the end that the common law rule on defaming the dead should yield, Herzog’s tour of the field is a worthwhile interrogation of much more than defamation, and much more than tort law.  His thesis unpacks the fundamental question of who we think we are, if we are so much more than the sum of our carbon compounds; and how that understanding of our personhood is effected and perpetuated by our most curious construct: the rule of law.