I'm part of a book group, among other reasons, to find an excuse to read things I otherwise would not take the time to read. I love my group, but a lot of the times, the reading only confirms my good judgment about use of time in the first place. The exceptions, though, stand out, e.g., Fredrick Backman's Man Called Ove, and invariably make the whole commitment worthwhile.

"Beautiful and clever" only begins to describe this book.  I have not read Towles's previous and popular Rules of Civility, so I cannot compare.  Suffice to say, though, I was surprised to learn that Towles is a Boston-born investment manager writing from Manhattan, and not a full-time scholar of the Russian Revolution, or even a recently arrived time traveler from 1920s Moscow.  Shelved as "historical fiction" in some libraries, this book depicts changing Russian society over decades after the revolution, from the 1920s to 1950s, all from the curious and ultimately delightful perspective of an aristocratic political prisoner under house arrest in an upscale hotel. 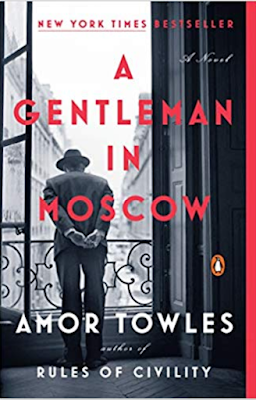 Maybe Towles was playing at Russian style, or it's just his speed; the book feels slow on plot a good ways in.  Ordinarily that's a turn-off for my action-aficionado, smartphone-addled brain.  Yet somehow this book was engrossing; every day I looked forward to re-immersing my mind's eye in the fantastical world of the Metropol Hotel, as envisioned from the endearingly witty perspective of Count Alexander Ilyich Rostov.

Towles is brilliant at authoring irresistible rabbit holes for the reader.  Sometimes these seemingly discrete stories feel like pointless tangents; a fellow groupie and I had simultaneously imagined Towles as the sort of person who carries around a small memo pad to jot down vignettes of the day, from his peculiar perspective, and then litters his writing room with the pages.  Yet these seeming tangents weave themselves together later in the book into a tapestry that is so much more than the sum of their parts.  While each vignette in the book seems dispensable in its time, the whole of the novel would be painfully incomplete were it lessened by any one.  Here's a short example, just as the Count has discovered morning coffee and the reward of grinding it himself:

Even as he turned the little handle round and round, the room remained under the tenuous authority of sleep.  As yet unchallenged, somnolence continued to cast its shadow over sights and sensations, over forms and formulations, over what has been said and what must be done, lending each the insubstantiality of its domain.  But when the Count opened the small wooden drawer of the grinder, the world and all it contained were transformed by that envy of the alchemists—the aroma of freshly ground coffee.

In that instant, darkness was separated from light, the waters from the lands, and the heavens from the earth.  The trees bore fruit and the woods rustled with the movement of birds and beasts and all manner of creeping things.  While closer at hand, a patient pigeon scuffed its feet on the flashing.

So perfect was the combination that upon finishing, the Count was tempted to crank the crank, quarter the apple, dole out the biscuits, and enjoy his breakfast all over again.

But time and tide wait for no man.


I won't go much into the meat of the tale, other than to counsel the reader to watch for time as a theme.  The seeming absence of plot is itself a grand illusion, representative of how time passes and transforms Russia outside the steady, unchanging walls of our protagonist's hotel confinement.  I didn't realize that until we started to put the pieces together as a book group, and now I wish I had paid closer attention on first read.

A TV series is in the making.  I thought that a bad idea, at first, worried that this delicate marvel would be tortured by Hollywood-like priorities until it yields something more fast and furious.  But a fellow groupie pointed out that it's all in the characters: an unhurried and dignified telling might be executed well in the right hands.  Perhaps it bodes well then that Kenneth Branagh is set to produce and star.  But don't wait for a screen adaptation; you'll be cheating yourself out of a journey best rendered by the imagination.
Posted by Richard Peltz-Steele at 3:00 PM