Monica Lewinsky has become a public figure in a whole new light in recent years, leaving behind the scandal that took her name, rather than his, mostly to differentiate scandals.  As Time put it, "Monica Lewinsky" was once the butt of a joke, many jokes.  John Goodman playing Linda Tripp (see WaPo reemergence in 2018) made for instant-classic Saturday Night Live bits (see Tripp's later perspective and a brief recollection with Goodman).

The world has changed, #MeToo, and Lewinsky figures into it differently today.  She has described herself as an original victim of cyber-bullying, before it was a thing.  Aptly, she's become an outspoken advocate against it, and a mite more effective in that capacity than the present First Lady.  Lewinsky broke her relative silence in Vanity Fair in 2014 and subsequently became a VF contributor and Twitter personality.  John Oliver interviewed her on Last Week Tonight in his excellent program on "public shaming" (below) (cf. Jon Ronson's definitive 2016 treatment of the subject in his book, So You've Been Publicly Shamed, featured here on The Savory Tort in 2017).


Apparently Lewinsky's "second act" is only getting going.  Among her many projects, she is contributing to the fall 2020 season of American Crime Story, on FX, The Hill reported, in which Sarah Paulson will play Linda Tripp decidedly more darkly than John Goodman did.  Meanwhile on stage, Lewinsky has become an advocate for online civility.  Building on her 2015 TED talk, The Price of Shame, she's booked into an aggressive public speaking agenda.

I can't help but find Lewinsky to be a compelling figure.  Aside from her curious, mostly involuntary role in American history, she embodies the mass media's power to destroy reputations with the impunity the First Amendment affords.  Yet her story unfolded in the highest of political arenas, the American executive office, in which First Amendment values are most urgently implicated, and First Amendment absolutism is most persuasively justified.  Whatever the merits of the case that shaped her perspective, she shares today a meritorious message: If the internet can be tamed, to do more good than harm, it will be by people and their choices, not by law and regulation.

Lewinsky is slated to speak in South Coast Massachusetts in fall and spring.  On October 17, 2019, Lewinsky will give an endowed lecture at Bridgewater College (more from WHSV).  On May 15, 2020, Lewinsky will speak in the New Bedford (Massachusetts) Lyceum at the Zeiterion Performing Arts Center ("the Z"); tickets are on sale now. 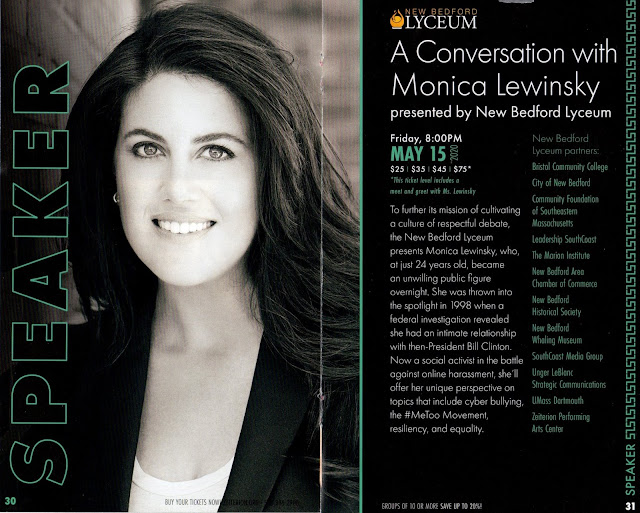