Not sure how to keep guns away from the mentally unfit? This cop has a stake and a plan.
Plus: Sandy Hook Update

Father of two, 19-year police veteran, UMass Law J.D. candidate 2020, and a distinguished survivor of my 1L Torts class, Robert C. Devine has published some practical but scholarly policy advice "to reduce access to firearms by those mentally incapable of handling them or those with current substance addictions."  Here is the abstract:

The United States is in a state of conflict over the ability to obtain firearms as well as their use in highly publicized mass shootings. On December 14, 2012, Adam Lanza obtained several firearms that were lawfully owned by his mother, but were improperly secured. Lanza killed his mother that morning and then drove a short distance to the Sandy Hook Elementary School in Newtown, Connecticut, where he murdered twenty-six people, many of whom were small children. Lanza eventually turned a gun on himself before being confronted by responding officers. Though mass shootings are often headlines in this country, the vast majority of misused firearms by the mentally ill are tragically used in suicide. The lessons of these examples must be used to augment current firearms policy in an effort to reduce the availability of firearms to those suffering with afflictions that make them ill-equipped to have access to them. Though the Commonwealth of Massachusetts asks pointed questions in these areas regarding the fitness of the potential license holder, it collects no data whatsoever regarding other full-time household members where a firearm may be kept, nor what measures the licensee takes to ensure its security. 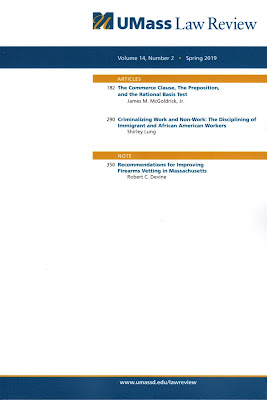 This Article illustrates a policy, grounded in facilitative principles, designed to reduce access to firearms by those mentally incapable of handling them or those with current substance addictions. Key components to the solution’s success should rely on increased vetting of the licensee’s environment and where lawfully owned firearms will be stored, in combination with assessing the risk factors of having been hospitalized for mental health, drug dependence, or alcohol dependence. This recommendation is merely an expansion of questions already used in the current Massachusetts firearms licensing application and would produce additional factors that a licensing official may consider when determining the suitability of an applicant. It is important to note that this would not be an outright prohibition for a licensee, which would likely be constitutionally impermissible. This Article concludes by reemphasizing the importance of giving licensing officials more information to consider in an effort to lower the risk of lawfully owned firearms ending up in the hands of the mentally ill or violent.

Mr. Devine takes due account of the Second Amendment, but recognizes that we're not doing all we can to implement regulation, even at the margins, that is hardly controversial.  The full article, Recommendations for Improving Firearms Vetting in Massachusetts, is available from the UMass Law Review and published at 14:2 U. Mass. L. Rev. 350 (Spring 2019).

The Connecticut Law Tribune reported last week that the Connecticut Supreme Court will hear oral arguments on September 26 in the defamation lawsuit against Alex Jones and InfoWars.  The trial court had allowed limited discovery despite the defense's anti-SLAPP motion.  The case is Lafferty v. Jones (Complaint at Scribd).