It's not just whistleblower law; First Amendment public employee-speech doctrine is in disarray

You might have heard some wrangling in the news about whistleblowers.  They're all the rage, lately, even here and there on this blog. 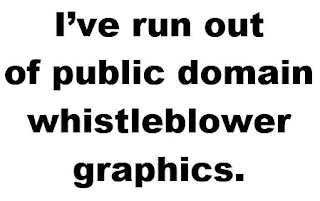 A big problem for whistleblowers in the public sector is that the U.S. Supreme Court has clearly held that there is no First Amendment protection for whistleblowing in the United States.  So public employees who blow the whistle on public misfeasance or malfeasance have to be prepared to pay for their good intentions with their livelihoods.

Notably, that was the Court's holding in 2006, when a lawyer, Richard Ceballos, suffered retaliation in the office of L.A. District Attorney Gil Garcetti for having disclosed to criminal-defense counsel that a sheriff misrepresented facts in a search warrant affidavit, despite having been admonished to remain silent.  Remember that when Gil Garcetti runs for President.  Even when there is statutory protection, as in the case of that federal whistleblower whom everyone's been talking about, it is extremely difficult to police prohibitions on retaliation, thus the whistleblower's present penchant for anonymity.

Well, welcome to the table, Dr. Trowbridge.  Some of us transparency-and-accountability types in the public sector have been living, working, and biting our tongues under Garcetti for more than a dozen years.

I don't concede that Garcetti applies to me; a footnote in the opinion left the question open as a matter of constitutional law for academics, who sit in a weird place, constitutionally speaking.  I've dared to offer my own constructive criticism here and there.  But often, I stay silent.  And by often, I mean a lot.  For example, you want to know what goes on at a public school inside the ABA accreditation process?  Well wouldn't you, then.  How nice for you.  Talk to the hand.

What we need is not another op-ed bemoaning Garcetti.  We need a way forward. 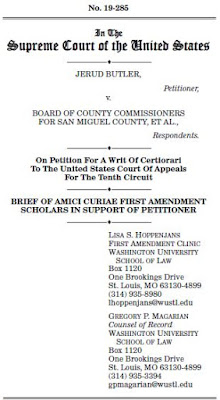 In 2016, Jerud Butler was reprimanded and demoted in his job at the San Miguel County, Colorado, Road and Bridge Department after he testified truthfully at a child custody hearing involving his sister-in-law and her ex-husband, another employee at the San Miguel County Road and Bridge Department.  His testimony, in a personal capacity, incidentally touched on the hours of operation of the department.  The Tenth Circuit rejected Butler's bid for First Amendment protection, finding Butler an employee of the government, like an employee anywhere else, subject to the whimsy of the employer.

Butler was not a whistleblower.  But Garcetti was not a watershed moment.  Rather, Garcetti was a symptom of an employee-speech doctrine in First Amendment law that has been badly broken since it was invented in Pickering v. Board of Education in 1968.

On behalf of "First Amendment Scholars," including me, Professors Lisa Hoppenjans and Gregory P. Magarian and their student team at the Washington University First Amendment Clinic at St. Louis University Law School filed an amicus brief in support of U.S. Supreme Court cert. in Butler (No. 18-1012).  Butler has got to be a mistaken outcome, even if we think that whistleblowing should be a statutory matter rather than a constitutional right, even under Pickering.

Like Dr. Trowbridge, I hope the Supreme Court at some point will realize the work that needs to be done to make sensible public-employee speech doctrine, whether fixing what we've got or starting from scratch.

Meanwhile I'll take anything that chips away at Garcetti.

Amici aligned with First Amendment Scholars in Butler included the National Whistleblower Center, the Center for Constitutional Jurisprudence, the Duke Law School First Amendment Clinic, and the Government Accountability Project.
Posted by Richard Peltz-Steele at 6:00 AM