Gambia AG initiates truth inquiry to get country on track


With the independence of a nation's attorney general now the subject of discussion in the United States, consider Ba Tambadou, AG of the African nation of Gambia, where I visited on its independence day, February 18. A former Hague prosecutor, Tambadou was instrumental in creating the present Truth, Reconciliation, and Reparations Commission, which now is holding hearings in Gambia and dropping revelations nearly by the day in the news there. 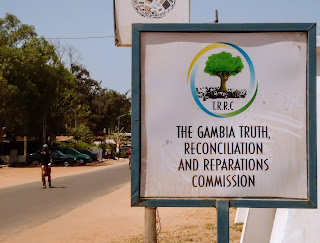 The Gambian TRRC concerns abuses of power, including repressive violence and press suppression, that kept Yahya Jammeh in control of the country from 1994 coup to surprise election upset in 2017. The ex president now lives in exile, in reportedly sweet digs in Equatorial Guinea. He seems to have ample access to the fortune he looted on the job, which is looking like hundreds of millions of dollars, despite a 2017 US freeze on his assets under the Magnitsky Act.


Unfortunately Gambia's elected president, Adama Barrow, has raised eyebrows by recently rescinding a pledge to serve only three years, though the national constitution does permit five. Political opponents whisper about corruption, and no doubt nerves are raw since the country finally freed itself of Jammeh. All the more important then is the independent judgment exercised by Tambadou to shine light on historical misdeeds. The TRRC is the sixth of its kind on the African continent and essential to break the cycle of maladministration in government, and hence the cycle of underdevelopment and poverty in this brilliantly diverse yet smallest mainland nation of Africa.


Posted by Richard Peltz-Steele at 6:00 AM