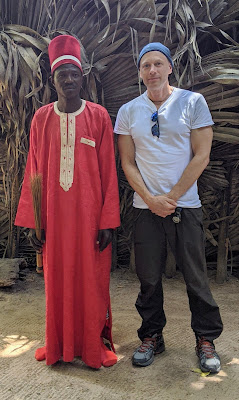 The king of Oussouye in the Casamance region of Senegal received me with my group earlier this week. The Oussouye are part of the Diola, or Jola, ethnic group, who populate a vast transnational area reaching from Gambia to Guinea-Bissau. Diola also span religious faiths, having Islamic and Christian adherents, though traditional African religious tenets run strong in tandem with colonial imports. The Oussouye tend especially to traditional faith.

The king dispenses justice in both criminal matters and civil disputes in Oussouye. Civil matters cover a broad range, from real and personal property, to domestic relations, to obligations. The king also operates a local social welfare system, growing a quantity of food to support needy members of the community.

Typical of the manner in which customary and "modern" law are integrated within African countries, the king exercises a jurisdiction of first instance. He explained that if someone takes a matter to the police or the courts of Senegal, the authorities will ask whether the complainant has yet consulted the king, and will refuse the matter if not. This system does not fully obviate conflict, as questions arise over when the national legal system should take precedence--especially in high-profile cases implicating human rights, including non-discrimination and the rights of children. But the great bulk of dispute resolution is managed uneventfully upon traditional principles.

Chosen according to a spiritual calling, not lineal heritage, the king is said to be supernaturally endowed with wisdom, notwithstanding a lack of formal training. The Oussouye king readily said that he had been a mechanic before the spirit moved him toward his royal role.

Posted by Richard Peltz-Steele at 1:07 PM