On the final day of the annual meeting of the New England Political Science Association, Saturday, April 27, I was treated to more intriguing papers and especially enriching discussion on constitutional law with co-panelists and discussants in the Public Law Section.  For the time being, I'm skipping presentation of my own work with Polish attorney Gaspar Kot—and my thanks to Kevin McGravey, Merrimack College, for his thought-provoking feedback—and sharing highlights of colleagues' work.

Right to education.  A common theme on our late-morning panel was probing the line between civil rights as passive protections and civil rights as affirmative entitlement.  Michael Paris, College of Staten Island CUNY, is working on a book that will consider the problem of race consciousness/race blindness relative to the right to education.  That's the same lately embattled right that rests at the heart of the federal court claim to civics education pending against the State of Rhode Island; the Government filed its motion to dismiss a scant few weeks ago.  Compare A.C. v. Raimondo, No. 1:18-cv-00645 (D.R.I. complaint filed Nov. 28, 2018) with Sheff v. O'Neill, 678 A.2d 1267 (Conn. 1996) (holding, 4-3, state bound by affirmative duty to provide equal opportunity of access to education for Connecticut schoolchildren).

U.S. Supreme Court in politics.  Kyle Morgan, Rutgers University, has coded, on various bases, no fewer than 11,000 U.S. congressional press releases about U.S. Supreme Court decisions.  He reports that this feat has caused more than one laptop crash.  Morgan is prepared to demonstrate that the way Republicans and Democrats frame disapproval of Supreme Court rulings differs fundamentally.  In short, Republicans bemoan the Court as anti-majoritarian, while Democrats frown on perceived abuses of democratic process.  As a result, the two sides talk about Court rulings without actually talking to each other in comparable language.  Morgan promises that his subsequent work will look at how the two sides might be brought together, that is, whether they can be made to care about the other's perspective.

'Resistant compliance' under the 14th and 15th Amendments.  My runaway favorite paper of the morning came from Lauren Foley, Western Michigan University, who is studying what she has termed "resistant compliance" with constitutional law.   That's when an actor complies with the law but takes a course of action that undermines its implementation—maybe openly, maybe quietly; maybe intentionally, maybe carelessly.  In this piece of her work, Foley compares white supremacist resistant compliance with the 15th Amendment, specifically the use of devices such as poll taxes and literacy tests to undermine black access to the polls while technically complying with the law, with University of Michigan resistant compliance with the state affirmative-action ban in an effort to prioritize diversity while without focusing on race.

Take a second to think that over.  "There are many reasons not to equate literacy tests with affirmative action," Foley conceded in her paper.  Motive matters, I thought.  But I admit, by the end of it, she had me.  Foley's interest is not in the policy priorities, no matter whether "revered or reviled," she wrote, but in the tools of resistant compliance.  Her comparison in that vein is not only apt, but illuminating.  Foley's work is informed by anonymous sources within Michigan higher ed and casts an unfamiliar light on how admissions officials have used technology to approach the diversity problem.  Those evidentiary revelations alone have the makings of an intriguing book.

Tunisia's Arab Spring.  In the early morning hour, I hit a comparative session on Asia and Africa and learned a great deal from and Ann Waldemar, University of Bridgeport, and Nicole L. Freiner, Bryant University.  Waldemar is investigating the unusual success of the Arab Apring in Tunisia (home of RightsCon 2019), in contrast with its MENA neighbors (at least to date).  (See James M. Dorsey writing on Libya and Egypt just Saturday.)  Especially interesting from a comparative-law perspective, incorporation of Islamic law into the new Tunisian regime has been a piece of the puzzle in public acceptance, Waldemar reports. 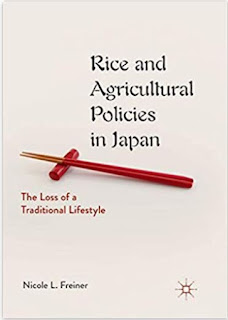 Rice law and policy.  Freiner is investigating the surprisingly compelling story of rice in Japan, or, more broadly, the development and regulation of agriculture relative to priorities as far-ranging as GMOs, public health, and foreign development.  She had some fantastically illustrative visual from the rice fields, and her research has been on the ground, talking with farmers.  Her new book from Palgrave is Rice and Agricultural Policies in Japan: The Loss of a Traditional Lifestyle (2019).  (Law school programs on food law and regulation, take note: Freiner would be a great guest to bring in from Ph.D. world, and U.S. food law and policy studies could benefit from an infusion of eastern comparativism.  Freiner is a neighbor of mine from Barrington, R.I., so invite me, too, and I'll drive.)

Chinese legitimacy in Africa.  In the afternoon, Drake Long, Georgetown University, talked about China in Africa.  For his master's work, he's taking a deep dive into China's vigorous strategy for international legitimacy, countering a historic deficit in international communications.

Perhaps needless to say, this move coincides with a trend of waning U.S. influence, or "crisis of U.S. legitimacy."  East Asia has been circumspect of Chinese influence, Long explains, but Africa has been receptive.  Long has traced the history of Sino-African relations from the 1940s to China's post-Mao economic reconstruction, to Angola oil investment, to Xi Jinping's pledge of tens of billions of dollars to African development amid the Belt and Road Initiative.  Belt and Road will cost $900bn according to China, Long says, or from $1tn to $8tn according to observers.  The ties to Africa meanwhile multiply.  For example, more Anglophone African students now go to China than to the United States or United Kingdom.

Does this mean an inevitable careening arrival at Chinese hegemony?  Well, there is an enduring debate within in China, Long explains, in trying to sell African development as worthwhile relative to unmet social and economic needs at home.  Whereas Americans will sign up for the foreign inculcation of democracy, no exceptionalist ethos so clearly dominates Chinese popular opinion.  Recent maneuvering within Chinese party leadership and propaganda machinery suggest awareness of this domestic ideological deficit and emerging strategies to address it.
Posted by Richard Peltz-Steele at 6:00 AM