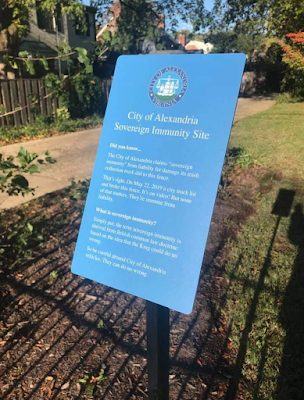 Attorney Dan Greenberg, friend of the blog and a federal policy adviser in Washington, D.C., contributes this photo from his home neighborhood of Alexandria, Va.

The City of Alexandria claims "sovereign immunity" from liability for damage its trash collection truck did to this fence.

What is sovereign immunity?

Simply put, the term sovereign immunity is derived from British common law doctrine based on the idea that the King could do no wrong.

So be careful around City of Alexandria vehicles.  They can do no wrong.


The underlying dispute was reported by Fox 5 D.C. in October.  A trash truck caused $5,000 in damage to Denis Goris's 30-year-old iron fence.

Sovereign immunity turns up often in a society in which government is pervasive in our lives and surroundings, and that's bound to cause frustration.  The sign-bearer is right that the essence of immunity is inequitable, as between the plaintiff who suffers an injury and the defendant sovereign who caused it.  The Federal Tort Claims Act waives federal sovereign immunity in a narrow class of cases, and states can be less generous with their tort claims acts.  The broader aim that keeps immunity going in a democracy is the protection of public assets, which belong to all of us.

It looks like Alexandria does use city staff for trash collection.  Contractors throw a wrinkle into the mix (federal, state).  I am not a Virginia lawyer; what I know of the state's tort claims act, it treats counties and cities much more generously than state-level actors.  The localities enjoy near absolute sovereign immunity for governmental functions, and, almost 50 years ago, the Virginia Supreme Court held that municipal trash collection is a governmental function entitled to immunity.  Alexandria does have an administrative claim process, and there's some room to argue.

The city told Fox 5: "Under federal and state laws and court rulings, the City is generally not liable for damages caused in the course of providing core government services. While the City conducts extensive planning and training to avoid damaging property, some damage does occur given the vast scope of City operations. Exemption from these claims saves a significant amount of money every year for taxpayers as a whole."

In a story last year, NBC 4 Washington reported: "Alexandria Won't Pay $4,600 in Damages to SUV Caused by City Trash Truck."  The city is as consistent with its tort claims as it is with its driving record.

[SUPPLEMENT: "Why is this still a thing?," Planet Money asks about state sovereign immunity in the context of excellent coverage of the copyright case pending in the U.S. Supreme Court, Allen v. Cooper.]
Posted by Richard Peltz-Steele at 6:00 AM