Grand jury secrecy is not sacrosanct

Georgia Public Broadcasting reported recently (via NPR; see also WaPo (pay wall)) that the U.S. Court of Appeals for the Eleventh Circuit will soon decide whether to unseal the grand jury records pertaining to a 73-year-old lynching case.  Meanwhile, the Rhode Island Supreme Court ponders whether to open contemporary grand jury records in the "38 Studios" economic development scandal.  Both cases remind us that grand jury secrecy is not sacrosanct and must yield to paramount public interests.

GPB reported more in August about the brutal murders of Dorothy Dorsey Malcom, her brother, George Dorsey, and his wife, Mae Murray Dorsey, at the hands of a mob of 20 to 30 assailants at Moore's Ford Bridge, outside Monroe, Georgia, in 1946.  As many people were there, the crime remains "unsolved," as GPB's Grant Blankenship explained:


The crime made national headlines. Over the course of a grand jury investigation, the FBI interviewed over 2,000 people—almost half of the county in 1946. A hundred people testified before the grand jury, but not a single indictment was handed down. 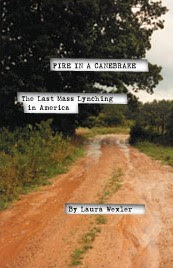 Now historians seek to unseal the grand jury records to find out more about what happened that day in 1946 and why the investigation was unyielding.  The Department of Justice and Federal Bureau of Investigation are resisting.

Incidentally but importantly, the definitive book on the Moore's Ford case is Fire in a Canebrake: The Last Mass Lynching in America, by Laura Wexler.  I went to secondary school with Wexler, so #BrushWithGreatness.

I welcome public reminders that grand jury secrecy is not sacrosanct.  Grand jury secrecy is a reasoned and historically derived common law inversion of the usual presumption of transparency in our judiciary.  As such, it's an odd nod, for our typically ruthless paradigm of all-or-nothing privacy, to the importance of protecting the reputations of persons who might be connected with investigations, but turn out not to be fairly implicated as witnesses or suspects.

However, an inverted presumption is still a presumption, which means it can be overcome, or rebutted.  Equally historically, common law has allowed challengers in the public interest to overcome grand jury secrecy, for example, after Watergate.  Transparency is a means to accountability, and when a gross miscarriage of justice has occurred, as seems indisputable in the Moore's Ford case, the public interest in learning what went wrong in the investigation, and possibly delivering some belated justice, may be ruled paramount.

Meanwhile, Rhode Island Governor Gina Raimondo is feuding with the state Attorney General's Office over access to the records of grand jury proceedings in 2014 and 2015 over the "38 Studios" economic development scandal.

As The Providence Journal recalled, "The state’s $75-million loan guarantee to retired Red Sox pitcher Curt Schilling’s high-risk video game venture ended up costing taxpayers a bundle when the company went belly up."  Criminal investigation was, again, unyielding.  "The statewide grand jury sat for 18 months, ending in 2015 with no criminal indictments. State lawmakers, former state Economic Development Corporation board members and staff, and 38 Studios executives were among the 146 witnesses the grand jury interviewed."

The ProJo summarized the pro and con of unsealing.  On the Governor's side, the state's attorney told the Rhode Island Supreme Court, 38 Studios marks "'a seminal event in recent Rhode Island history. It has cost taxpayers tens of millions of dollars. It has brought threats to the State’s credit rating.  It spawned a massive civil litigation resulting in $61 million of settlements. It caused the Securities and Exchange Commission to file a complaint against a state agency.... It prompted a criminal probe that reportedly touched the entire membership of the 2010 General Assembly (save one former member serving a federal prison sentence).'"

The AG's office responded: "'[N]o one was indicted, the grand jury only recently concluded, the participants are still alive, and ... the [10-year] statute of limitations has not expired.... Unlimited disclosure ... may also adversely affect future grand jury participants who will be unable to rely upon the long-established policy that maintains the secrecy of the grand jury proceedings.'"

The Rhode Island Supreme Court heard oral arguments yesterday, November 7, In re 38 Studios Grand Jury, No. SU-2017-0301-A, but puts precious little online.  The ACLU of Rhode Island filed as amicus on the side of the Governor.
Posted by Richard Peltz-Steele at 6:00 AM